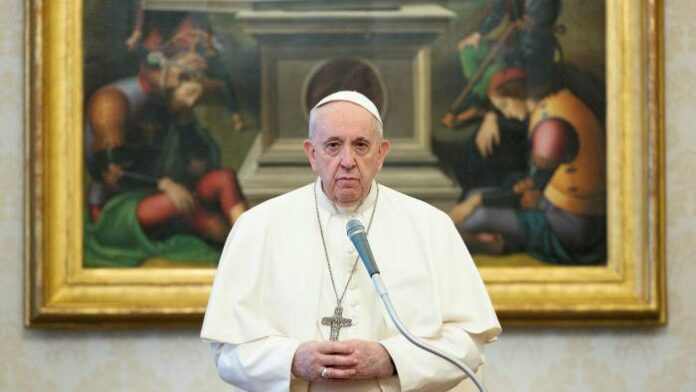 Pope Francis also called on Christians in Iraq to play a bigger role in public life, “as citizens with full rights, freedoms, and responsibilities” as he put it.

Pope Francis was the first Christian faith leader to visit Iraq on Friday, which also has an important position in the Bible. Pope Francis, who will begin his visit by meeting Iraqi politicians and other officials, will then call upon the Catholic clergy and seminarians of the Syrian Catholic Church in Bagdad. The Pope’s visit to Iraq is a symbolic gesture towards the Christian minorities of Iraq that have been persecuted in the Muslim-majority nation for decades.

My dear Christian brothers and sisters from #Iraq, who have testified to your faith in Jesus amid harsh sufferings: I cannot wait to see you. I am honoured to encounter a Church of martyrs: thank you for your witness! https://t.co/bgm76p31tM

Who are Iraq’s Christians?

The pope will meet with Grand Ayatollah Ali al-Sistani in the city of Najaf on Saturday in an attempt to ease years of conflict between Christians and Muslims in Iraq.

For Shiites, who make up the majority of Iraq’s population, Najaf is the holiest city. The pope will also attend an interfaith gathering at the Plain of Ur, which is thought to be the birthplace of Abraham, the father of the three Abrahamic religions: Islam, Christianity, and Judaism.

President Barham Salih of Iraq invited the Pope to visit his country in 2019. The 84-year-old priest declined the invitation, but due to the coronavirus pandemic, he couldn’t visit sooner. The vaccine was given to Pope Francis in January, and he decided that his first foreign trip would be to Iraq.

“Dear brothers and sisters in Iraq, peace be upon you! In a few days, I will finally be among you. I long to meet you, to see your faces, and to visit your land, the ancient and extraordinary cradle of civilization. I come as a pilgrim, as a penitent pilgrim to implore forgiveness and reconciliation from the Lord after years of war and terrorism, to ask God for the consolation of hearts and the healing of wounds,” the pope had said before he left for Iraq. ”

Pope St. John Paul II, Pope Francis’ predecessor, was the first Vatican chief to schedule a visit to Iraq in 1999. The visit, however, had to be postponed due to the tensions that accompanied the invasion of the United States in 2003, as well as prior to that. On March 8, Pope Francis will return to Rome.

US Election Results Updates: Joe Biden will be 46th President of the United States,Kamala Harris...

Pope Francis ‘happy’ to land in Baghdad, Urges end to violence and extremism on historic...