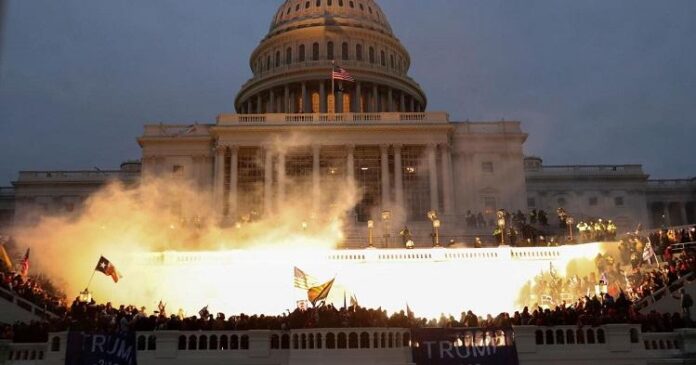 Hundreds of backers of President Donald Trump stormed the U.S. Capitol on Wednesday, in a dramatic attempt to reverse his electoral defeat. But after hours of confusion in which the police struggled to reclaim power, the legislature returned to Congress to begin certifying the win of the Democratic President-elect Joe Biden.

Hours after Donald trumps unprecedented rally challenging his defeat, flag-waving supporters tore down barricades outside of the Capitol and swarmed inside, with a special session heading into an emergency recess as demonstrators entered the chambers.
Trump’s desperate last-minute effort to reverse his electoral defeat triggered confusion and allegations of a “coup” attempt, with many countries calling on Trump’s followers to show calm and restraint.

In the most significant attack on the icon of American democracy in more than 200 years, violent protesters forced their way through metal security barricades, smashed windows and scaled walls to battle their way to the Capitol, where they strolled through the halls and scuffled with police officers.

Police said four people died- three from medical emergencies and one from bullet wounds -in chaos.

Many nations, including Australia, the United Kingdom, and Canada, are calling for a calm and peaceful power transfer.

As President of the UN General Assembly,I’m saddened & concerned by today’s developments at the Capitol in #WashingtonDC.The US is one of the world’s major democracies. I believe that peace & respect for democratic processes will prevail in our host country at this critical time.

We regret unfolding events in Washington DC. Our thoughts are with the American people. Violence has no place in thwarting democracy. We look forward to the peaceful transition of the political administration, which is the hallmark of democracy. Kia tau ngā manaakitanga. 🇳🇿🤝🇺🇸

Very distressing scenes at the US Congress. We condemn these acts of violence and look forward to a peaceful transfer of Government to the newly elected administration in the great American democratic tradition.

I believe in the strength of US institutions and democracy. Peaceful transition of power is at the core. @JoeBiden won the election.

I look forward to working with him as the next President of the USA. https://t.co/2G1sUeRH4U

We follow the events in the USA with concern and invite the parties to calmness. We believe that problems will always be solved within law and democracy. As Turkey, we have always been in favor of the law and democracy and we recommend it to everyone.

Shocking scenes in Washington, D.C. The outcome of this democratic election must be respected.

“The enemies of democracy will rejoice at these incomprehensible images from #WashingtonDC. Inflammatory words turn to violent action – on the steps of the Reichstag, and now in the #Capitol“ https://t.co/dHZHuw4NYo

“Canadians are deeply disturbed and saddened by the attack on democracy in the United States, our closest ally and neighbour. Violence will never succeed in overruling the will of the people. Democracy in the US must be upheld – and it will be.”—Prime Minister Justin Trudeau

Disgraceful scenes in U.S. Congress. The United States stands for democracy around the world and it is now vital that there should be a peaceful and orderly transfer of power.