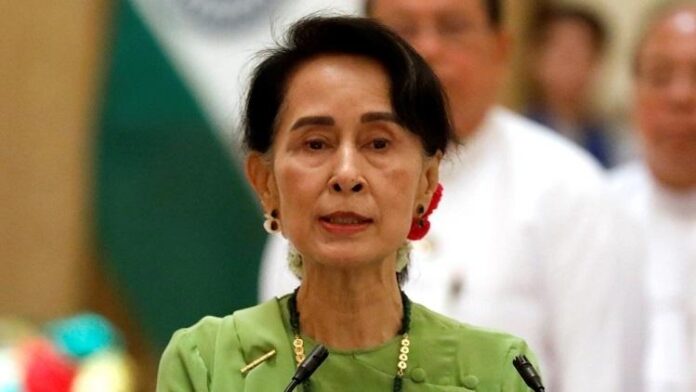 Real Leader Aung San Suu Kyi and President Vin Myint were taken into custody by the Myanmar Army and declared an emergency for a year. Min Aung Hlaing, the commander-in-chief of the army, has taken control over counrty.

In the neighboring nation Myanmar, there has been a coup. Real Leader Aung San Suu Kyi and President Vin Myint were taken into custody by the Myanmar Army and declared an emergency for a year. Myanmar military television says the army has taken charge of the country for a year, and Min Aung Hlaing, the army’s commander-in-chief, is in office.

The Myanmar Army argues that in reaction to the electoral fraud, coup action was taken. With this coup, army troops were deployed to various parts of the country.

In Yangon, Myanmar’s main city, soldiers have been posted outside the city hall so that no one can resist the coup.

Let me tell you that the military has ruled for a long time in Myanmar. A dictatorship of the ‘military people’ has been in force in the country from 1962 to 2011. General elections were held in Myanmar in 2010, and a ‘civilian government’ was established in Myanmar in 2011. In which elected officials were given an opportunity to control the public.

The real power still stayed with the ‘Army’ even after the establishment of a civil government. Indirectly, Myanmar’s first influence remained the ‘military public’; it could not be withdrawn in the way that it appeared from the outside. The event that occurred on Monday, therefore, is nothing but the true nature of Myanmar’s political landscape.

Several nations, including the US, have expressed concern about the coup and appealed to the Myanmar army to comply with the law. “Burma’s military has taken steps to ease the country’s democratic transition, including the arrest of
main leader Aung San Suu Kyi and other civil officials.” White House spokeswoman Jane Saki said.

The United States, warning the Myanmar army, said, ‘The United States has opposed any effort to change the outcomes of recent elections or undermine the democratic structure of Myanmar, and if this coup does not stop, those responsible will take action against it.

At the same time, Australian Foreign Minister Marij Payne called for Suu Kyi to be released, adding that we firmly support the peaceful reorganization of the National Assembly in line with the November 2020 general election results.
Significantly, on Monday, Myanmar’s MP’s were to assemble in the capital Nayapita for the first parliamentary session since last year’s elections.

In the November elections, Suu Kyi’s party won 396 of the 476 seats in the combined lower and upper houses of parliament, but the military has 25 percent of the total seats under the 2008 draft constitution of the military and many primary ministerial positions.They’re also reserved for the military.The army alleges that the elections were massively rigged, although it has not been able to provide evidence yet.